About an half hour drive from Karatu lies Ngorongoro crater. It is an old volcano, and on the crater floor you can find heaps of wild animals thriving in the national park, and drinking the water from the lake. So we had high expectations when our Land Rover descended from the crater rim in low gear.

The first sighting was a couple of other jeeps scurrying around the national park. If you want to watch animals in private, don’t come to Ngorongoro crater. The park has a couple of roads crossing it, and you are not allowed to leave the road. Thus all the tourist jeeps are more or less following each others tracks.

Nevertheless we saw a big herd of antilopes running away from something. In the far distance we could see two lions hunting the antilopes. They were too far away for being able to take pictures of them, or even see them clearly, but we got a feeling of the rich wildlife in the crater.

The rest of the morning was more rewarding. Zebras, wildebeest, a cheetah mum with her three cubs and a hippo. Not bad. For lunch, we stopped at the picnic site. We were not alone. There must have been a hundred jeeps at the site. The exotic part of the site were the birds. In stead of the ordinary small birds picking crumbs of food at your feet at your favourite cafe, a pack of birds of prey (glador, in swedish) ripped the food out of the tourist’s hands. So after our friend Diana got her chicken stolen by a big bird, we ate in the car.

After lunch it only took 15 minutes to spot our first close-up lion. It was lying around in the sun just a couple of meters from the road. In no-time, six or seven Land Rovers parked next to each other, tourists hanging out of the cars snapping away pictures of the lioness. Yes, we got our pictures too.

The rest of the day we spotted a rhino, some hyenas, elephants and some more lions. You indeed get spoiled with wild animals in Ngorongoro crater. The only animal we lacked to collect the ”big five” was the leopard. Well, I guess we could take that after all. 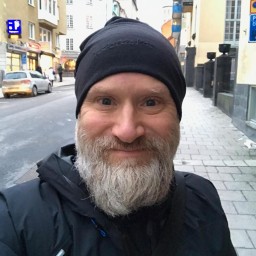